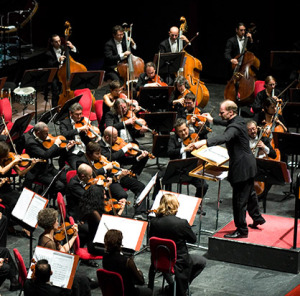 William Tell was Rossini’s final opera, although the composer lived for nearly 40 years after its composition. Its premiere was triumphant but the opera’s epic scale and extravagant vocal demands have rendered revivals few and far between. Recognized immediately from its famous, galloping overture, William Tell dramatizes the life of the Swiss folk hero whose expert marksmanship with a crossbow is the stuff of legends. A grand opera in every sense, William Tell thrills with its passionate arias, superb ensembles, and sweeping orchestral splendor. This concert version introduces four operatic soloists to local audiences alongside the 200-member orchestra and chorus of the Royal Theatre of Turin, one of the most important opera houses in Italy. Featuring