We would like to inaugurate a monthly appointment in which we will talk about Italian historical figures, archeological sites, art, cities, or overall culture. We are launching this new blog by talking about cities that were mentioned by non other than Dante Alighieri himself in his masterpiece la Divina Commedia.
A quick disclaimer before starting: when Dante began writing the Divine Comedy, he was feeling extreme angst towards a political situation that caused an actual civil war throughout Italy. The Italian political situation is definitely one of the most unique in the history of mankind. Italy was characterized by a myriad of states, reigns, and cities that functioned as sovereigns constantly fighting against each other. Dante found himself caught in the midst of these animosities eventually ending on the losing side, a circumstance that led him into exile. For this reason, whenever Dante mentions a city in hi opus (especially in the Inferno), he usually does not have pleasant things to say about said city.

With this being said, let’s begin.
Pisa is a city located in Tuscany, at about one hour away from Florence. It used to be a powerful sea harbor strategically positioned in the middle of the Tyrrhenian sea. The city is divided by the river Arno (the same river that flows through Florence). The origins of the city date back to Romans times, but Pisa acquired its relevance during the Middle Ages becoming one of the four Repubbliche Marinare (Maritime Republics) along with Venice, Genova, and Amalfi. Undoubtedly, the city is most well-known worldwide for its Leaning Tower, which up until the construction of the Eiffel Tower used to be the tallest building of the Old Continent standing at 186 feet (56 mt.). The tower was built as a standalone bell tower to demonstrate the power and wealth of the city and it is part of the Piazza dei Miracoli complex along with the Cathedral, the Baptistery and the Monumental Cemetery.
Dante dedicates an infamous invective to Pisa wishing for the entire city to be flooded as a punishment for an incredibly nefarious deed that took place in what is nowadays commonly called as the Arco of Conte Ugolino (or the arch of Count Ugolino, here featured in the first picture). Ugolino della Gherardesca was a nobleman and politician from Pisa that ended up dying in 1289, after being imprisoned with some of his sons and grandsons in a tower. Count Ugolino’s political views differed from the ones of Pisa’s archbishop Ruggieri, the man responsible for the Count’s tragic end. It is said that the noble family was left to die of starvation, and that the Count ended up eating the corpses of his relatives before dying himself. The image reported by Dante is an extremely gruesome one, as in his imaginary trips, the poet encounters Ugolino while he’s feasting on his archenemy’s skull.
“La bocca sollevò dal fiero pasto
quel peccator, forbendola a’capelli
del capo ch’elli avea di retro guasto”
Alighieri, Inferno, XXXIII v. 1-3). 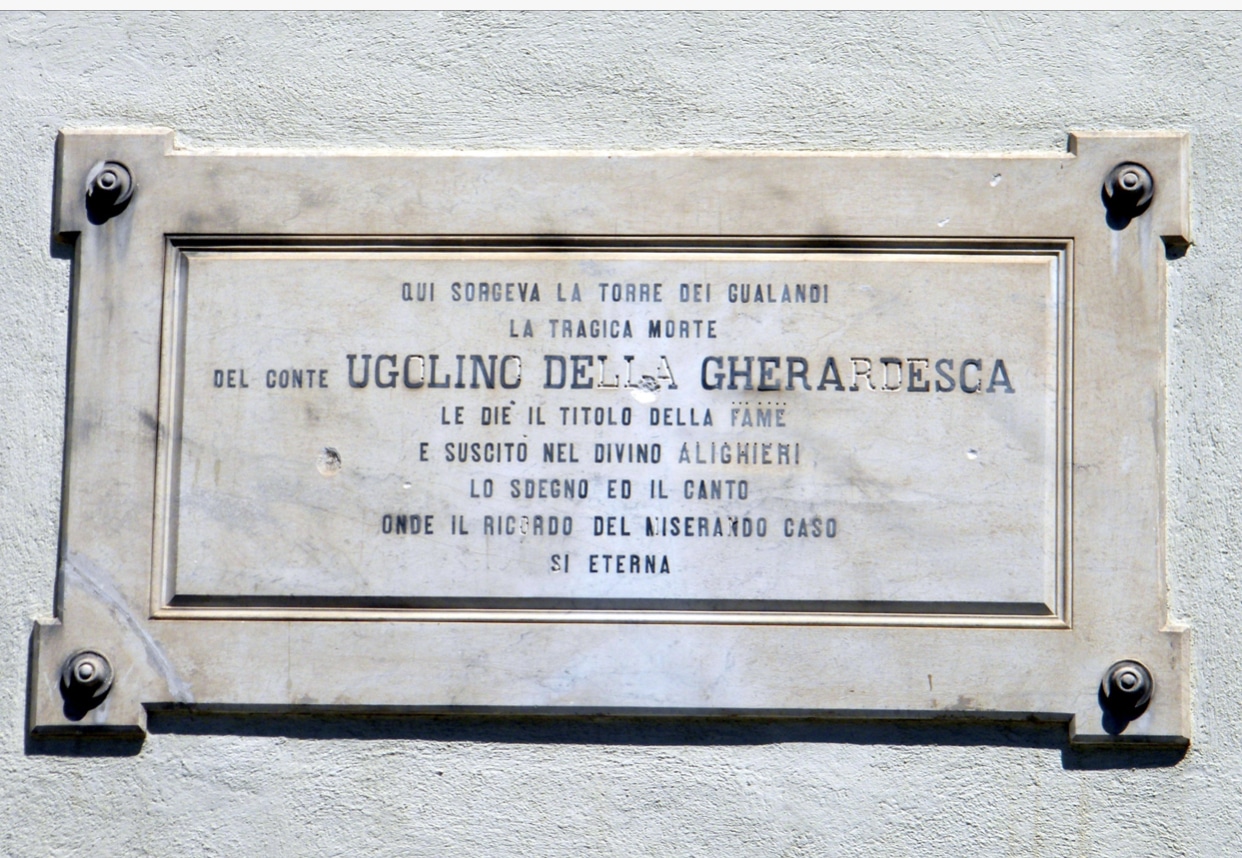 The story of the della Gherardesca Counts is part of the city of Pisa as well as the Leaning Tower, and any true Pisan will be able to tell you about it.
Nowadays, Pisa is quite a small city extremely famous in Italy for its renowned university which was founded in 1343, being the 11th one in the world. The city hosts two specialty schools as well, the Institute Sant’ Anna, very well versed in ground-breaking research, and most importantly La Scuola Normale Superiore (featured in the fourth picture below). This University only accepts a handful of students and is particularly famous for its Physics and Mathematics departments. Several worldwide physicist, such as Enrico Fermi studied here, as well as some of our Presidenti della Repubblica, such as Carlo Azeglio Ciampi.
I hope that you will like these blog posts and that you will support them and share them with your friends and family. Most of all, we hope that once things will resume back to normality, you will visit all the wonderful cities and places that we will be exploring together.
Here at the Dante Alighieri Society of Michigan we are constantly working to bring you new and relevant content. Consider supporting us and learn Italian. Visit us at www.dantemichigan.org, for more information