In honor of Holocaust Remembrance Day, which is observed on January 27, the Dante Alighieri Society of Michigan commemorates those Italians who suffered persecution as a result of the Racial Laws imposed by the Fascist government and under the Nazi occupation during World War II.

In commemoration of the Giorno della Memoria, we will talk to Professor Levis Sullam, a specialist in modern Italian history, Jewish history, and the History of Antisemitism and of the Holocaust, to try to understand the role Italians played in the genocide of Jews in Italy; how Italians participated and contributed to the isolation, dehumanization, and ultimately the deportations and what happened to Jews in Italy and their property during the 1930s and 40s.

Simon LEVIS SULLAM is Associate Professor of Modern History at Ca’ Foscari University in Venice. Professor Levis Sullam studied in Italy, France, and the United States. He graduated with a PhD in History from Ca’ Foscari University in Venice. He studied at UCLA, he was an Associate Fellow at the Italian Academy of Columbia University, New York, and an Andrew W. Mellon Postdoctoral Fellow and Visiting Lecturer at the University of California, Berkeley, a Max Weber postdoctoral Fellow at the Istituto Universitario Europeo in Fiesole; and a Leverhulme Research Fellow at Oxford University, where he also taught European History. In addition, he was a professor at the University of Siena Master’s degree in Human Rights and Genocide Studies. 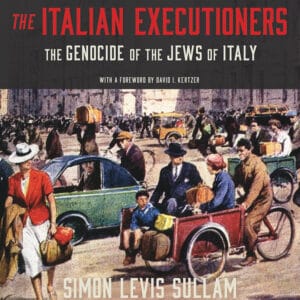 ofessor Levis Sullam is the author and editor of numerous books including Giuseppe Mazzini and the Origins of Fascism (Palgrave 2015), The Italian Executioners. The Genocide of the Jews of Italy (Princeton University Press 2018) and Jews, Liberalism, Antisemitism. A Global History (with Abigail Green, Palgrave forthcoming).

Scroll Up Scroll Up