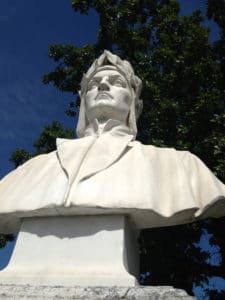 Dante Alighieri (1265-1321)
Dante was born in Florence in 1265 at a time of civil strife between two rival factions: the Guelfs and the Ghibellines. Dante’s family were loyal to the Guelfs, who fought in support of the Pope. The Ghibellines fought for the interest of the Holy Roman Emperor.
At the age of nine, Dante met Beatrice Portinari, whom he instantly fell in love with. Though he never married Beatrice, instead marrying Gemma Donati, Beatrice would be Dante’s muse for the rest of his life. Dante would dedicate much of his early poetry, written in the vernacular dialect of the streets of Florence, to Beatrice. The poems, which would be called il Dolce stil nuovo, or “the sweet new style,” were primarily love poems dedicated to Beatrice. The most significant of these would be La Vita Nuova (1293), written in vernacular, a sweeping ode to Beatrice that marked a turning point from the use of Latin toward the use of vernacular Italian. It is often viewed as a precursor to the Divine Comedy.
Against the violent political backdrop of his day, Dante entered into politics, holding various offices in city government. However, in 1301, Dante’s political rivals gained power, and the poet was exiled from Florence, never to return to his beloved city.
Dante circulated around the courts of northern Italy, serving various counts, dukes and lords in Verona, and ultimately in Ravenna, where he died in 1321. Some historians suggest Dante may have traveled as far as Paris or even Britain during his exile.
While in exile, Dante began composing what is regarded as the quintessential medieval epic poem: La Divina Commedia — the Divine Comedy.
La Divina Commedia is written in a complex poetic style called terzina, and is layered with classical and Christian symbolism. Dante’s vision of the afterlife is populated with saints and sinners from classical mythology and the Bible, as well as Dante’s medieval contemporaries from Italy and Europe.
The Comedy begins:
—Nel mezzo del cammin di nostra vita
mi ritrovai per una selva oscura
ché la diritta via era smarrita
—In the middle of the road of our life
I found myself in a dark forest
where the straight path was lost
Dante then begins his journey in The Inferno. Guided through hell by the Latin poet Virgil, Dante encounters damned spirits and witnesses the ironic punishments to which the unrepentant are eternally condemned.
In the second part of The Comedy, Purgatorio, Dante emerges from the frozen floor of hell and ascends to the mountain of purgatory, where the repentant sinners are purified and cleansed with fire to prepare them for their final ascent into heaven.
In the third and final part of The Divine Comedy, Paradiso, Dante is reunited with Beatrice, who acts as his guide. In heaven he encounters the saved and the saints. At the culmination of his ascent, he is in the presence of God, which he describes as “l’amore che move il sole e l’altre stelle,” or “the love which moves the sun and the other stars” (Paradiso, Canto XXXIII, 145).