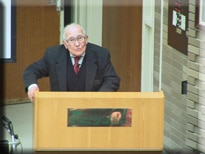 Piero Foà was one of the most distinguished members of the Italian American community in Detroit, serving as Professor of Physiology at Wayne State University and as President of the Dante Alighieri Society – Michigan Chapter. Foà practically grew up in a medical laboratory; his grandfather was a professor of pathology at the University of Turin and his father taught physiology at the University of Milan. Emphasis on scholarship, service and tradition formed his character and directed his life.