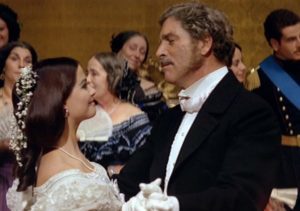 Luchino Visconti’s best film and certainly the most personal of his historical epics, The Leopard chronicles the fortunes of Prince Fabrizio Salina and his family during the unification of Italy in the 1860s. Based on the acclaimed novel by Giuseppe Tomasi di Lampedusa, published posthumously in 1958 and subsequently translated into all European languages, the picture opens as Salina (Burt Lancaster) learns that Garibaldi’s troops have embarked in Sicily. While the Prince sees the event as an obvious threat to his current social status, his opportunistic nephew Tancredi (Alain Delon) becomes an officer in Garibaldi’s army and returns home a war hero. Tancredi starts courting the beautiful Angelica (Claudia Cardinale), a daughter of the town’s newly appointed Mayor, Don Calogero Sedara (Paolo Stoppa). Though the Prince despises Don Calogero as an upstart who made a fortune on land speculation during the recent social upheaval, he reluctantly agrees to his nephew’s marriage, understanding how much this alliance would mean for the impecunious Tancredi. Painfully realizing the aristocracy’s obsolescence in the wake of the new class of bourgeoisie, the Prince later declines an offer from a governmental emissary to become a senator in the new Parliament in Turin.

Registration is required by February 6, 2020