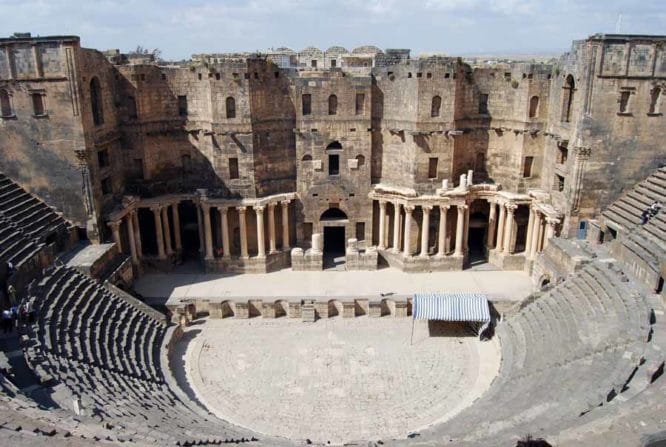 I Teatri Romani – The Roman Theaters

Join us for this special Caffè & Cultura by Prof. Wladek Fuchs

Prof. Fuchs will speak about the rise of the Roman theater as an architectural form, its role in the Roman society, and finally its decline.

There were over 400 theaters built during the Roman period in all parts of the Empire. Vitruvius in his treatise on architecture from the 1st century BCE says that every respectable city must have one, and it should be built right after the forum, the civic center of the city. We can see their majestic ruins across the entire Mediterranean region. Some of the best preserved are found outside of Italy, in such locations as Sabratha and Leptis Magna in North Africa, Merida in Spain, Orange in France and Aspendos in Turkey.
They were magnificent structures, built for thousands of people. The largest of them all, the Theater of Pompey in Rome, built in 55 BCE, was designed for 20,000 spectators. Unfortunately, there is nothing left of it that can be seen in the Eternal City. Even smaller theaters, in provincial towns, were equivalent in size to the current venues of entertainment. The theaters had an important function in the cities – performances were often connected with religious ceremonies, or political events. Theater had also a major role in proliferation of the Roman culture.

Wladek Fuchs is a professor of Architecture at the University of Detroit Mercy in Detroit. He is also the President of the Volterra-Detroit Foundation that organizes academic, cultural and artistic programs in the city of Volterra in Italy. Prof. Fuchs’ research is focused on architecture of Roman theaters.

Registration is required. This event is free and open to the public.

This event is SOLD OUT!