Organized under the High Patronage of the President of the Italian Republic, by  the Dante Alighieri Society of Michigan, with the support of the Federazione Abruzzese del Michigan, the Italian American Club of Livonia Charitable Foundation (IACLCF) in collaboration with the Italian Program in the Department of Classical and Modern Languages, Literatures, and Cultures at Wayne.      Under the Auspices of the Consulate of Italy in Detroit. 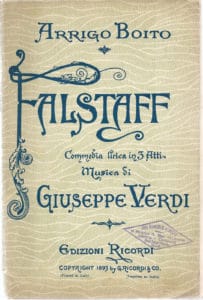 Giuseppe Verdi’s final operatic masterpiece, Falstaff, is a brilliant comedy that astonished the musical world, coming as it did from the imagination of an author whose previous operas were the very embodiment of Romantic drama and tragic action. Yet here was a fast-paced, sophisticated and witty score (the conductor Toscanini referred to it as “quicksilver”) written to an equally brilliant libretto inspired by Shakespeare. And to think that just a few years earlier, Verdi had wanted to retire from the theater altogether.
The back-story of how Falstaff came to be, of the collaboration between the great composer and his ingenious librettist Arrigo Boito, and of the crafty diplomacy and expert project-management of his publisher Giulio Ricordi, make for a tale every bit as fascinating as the plot of the opera itself.
The presentation will include images of sets and costumes from the opera’s premiere, preserved in the famous Ricordi Historical Archive of Milan.

Gabriele Dotto, a scholar specialized in 19th- and early 20th-Century Italian opera, is general editor of the critical editions of the operas of Puccini and co-general editor of those of Donizetti, both published by Casa Ricordi of Milan. He was the first managing editor of the Verdi critical edition (University of Chicago Press), for which he is preparing the edition of Falstaff. He is currently director of the Michigan State University Press and serves as director of scholarly initiatives at Milan’s Archivio Storico Ricordi.

This event is open to the public. Reservation is required by October 16th