Reflections on the Title of the Divine Comedy 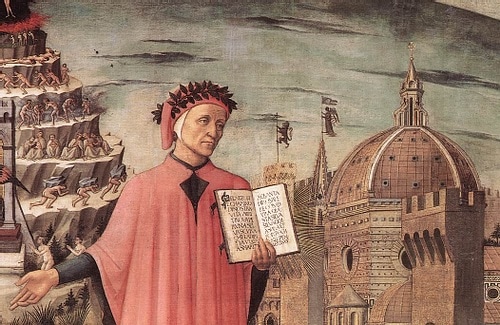 Join us in the opening of the Anno Dantesco! In 2021 we celebrate the “Father of the Italian language” more than ever, as this year will mark the 700th anniversary of Dante Alighieri’s death with a program of commemorative events.

How did Dante’s great poem come to be known as “La Divina Commedia” or, quite simply, “La Commedia”?
If Dante himself called it a “commedia”, why did he do so? And how can it be both a “Comedy” and a “Sacred Poem”, Dante’s other name for it?
What is the poem about that could justify such apparently diverse titles? Is the Dante in the poem the same Dante Alighieri from Florence who died 700 years ago? And if he is, why does he ask us to believe that he went to Hell, Purgatory and Paradise? What were his aims in writing such a story and did he achieve them?

A presentation by Prof. Lino Pertile.

LINO PERTILE is Carl A. Pescosolido Research Professor of Romance Languages and Literatures, Harvard University, and member of the Accademia dei Lincei, Rome.

A graduate of the University of Padua (Italy), he taught Italian Literature in France and Italy (1964-68), and the United Kingdom (1968-1995) before joining Harvard in 1995 as Professor of Italian Literature. At Harvard, he served as House Master of Eliot House for ten years (2000-2010) and, from 2010 to 2015, as Director of Villa I Tatti, the Harvard University Center for Italian Renaissance Studies in Florence. He has published essays on the French and Italian Renaissance, in particular on Montaigne and French travellers to Italy. His research has focused on the Latin and Italian Middle Ages (Dante), the Renaissance (Bembo and Trifon Gabriele), and 20th century Italian literature (Pavese and the contemporary novel).

If you are NOT a DAS member, please consider supporting DAS 2021 events with a suggested donation of $8
Dante members participation is FREE